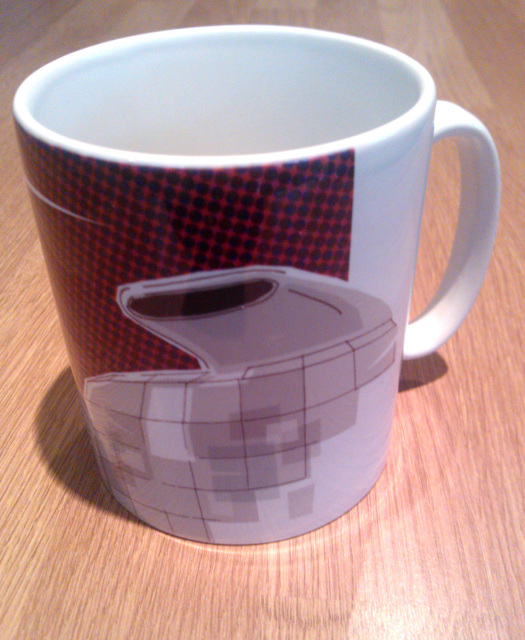 SKU:
£10.95
£10.95
Unavailable
per item
Capacity: 330ml
Height: 90mm
Diam: 80mm
Material: Ceramic earthenware Price includes post & packaging  [polystyrene box]
One of a set of 3, showing different Sheffield iconic buildings. This is the Centre for Popular Music building, built for the millenium celebrations with lottery money, in a pop art style.
Add to Cart
This building, designed by Nigel Coates Architects following an architectural design competition managed by RIBA Competitions, consists of four giant stainless steel drums, surrounding an atrium area, the upper floor of which has a glazed roof. The drums, whose tops were built to rotate in to the wind, no longer rotate and have been left pointing in various directions.

The unusual building has acquired a number of local nicknames including the curling stones, drums and kettles. The Museum featured a 3D surround sound auditorium in one of the drums (called Soundscapes) created by Sheffield-based musician and producer Martyn Ware, who later used the same technology as the basis for his touring project "The Future of Sound". Two other drums were called Perspectives (music for different purposes) and Making Music (hands on). The final drum was used to show music around the world, but was supposed to accommodate changing exhibitions - this never happened as the museum closed. The interactive exhibitions were developed with the Philips electronics firm.

The ground floor contained office space, a shop, a bar, a cafe and a further exhibition space. Access to this floor was free, with only the top floor forming the museum.